illumis Alerts: The Case of the Congressman

Alerts are a powerful tool on illumis that provide ongoing monitoring of a person or entity to ensure that you don’t miss new public records becoming available at a time when they may matter most.

To illustrate the potential power of Alerts, consider this recent example:

A few months after the 2018 midterm elections, news broke that a newly-elected member of congress had recently been party to a divorce case which included allegations of adultery. The court filing had become publicly available back in August, but the story wasn’t published until January 15th.

BOISE – New Idaho congressman Russ Fulcher and his wife, Kara, divorced in September after she cited his “acts of adultery.”

At the time, Fulcher was running for Idaho’s 1st District congressional seat, after winning a hard-fought, seven-way GOP primary in May with 43.1 percent of the vote. But the divorce, filed in Ada County, escaped public attention during the campaign.

The candidate in question wasn’t running in the most competitive race in the country, but illumis Alerts could have provided an immediate flag on the court records in question.

On August 8th, 2018, the first filing in the divorce record became available on the Idaho State Judicial Website after being filed in Ada County:

That same day, an illumis Alert set up for Russell Fulcher and checking Idaho Courts would have found the record:

And, with Alert emails set up, immediately after illumis found the record, an Alert would have been sent directly to a subscriber’s inbox: 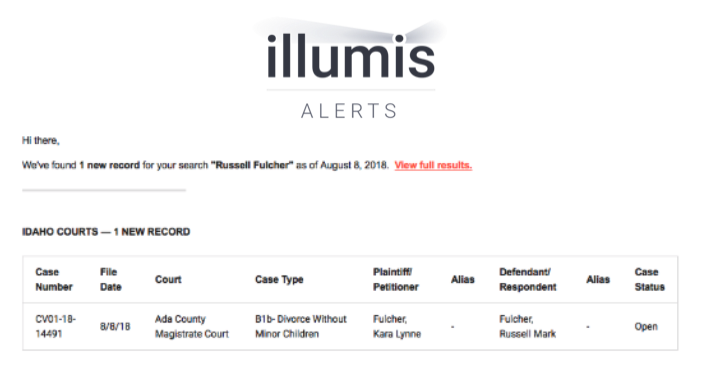 Another similar example involved then-congressman and then-nominee for Secretary of the Interior Ryan Zinke. In October 2016, a church in DC filed a complaint against Zinke and his wife in DC Superior Court alleging unpaid rent on a property the church owned. The church accused Zinke and his wife of “wrongfully abandoning” the property and of owing more than $66,000 in rent and other fees. Although the Zinkes argued the property had been “unlivable” and filed a countersuit against the church, the two parties reached an undisclosed settlement almost a year later in August 2017.

Again, illumis Alerts could have provided much earlier detection of this case.

On October 21st, 2016, the original Complaint for Breach of Contract was filed with the DC Superior Court and became available on the public docket: 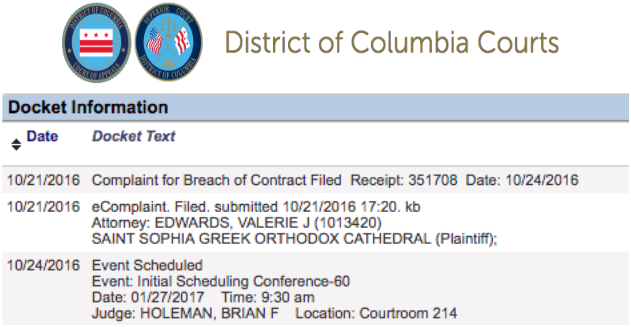 The same day, a illumis Alert set to check DC Courts for Ryan Zinke would have found the record:

And immediately after, illumis would have sent an Alert with the record directly to a subscriber’s inbox.

For interested parties, these records – which took months to discover without illumis – could have been delivered right to an email inbox within 24 hours of becoming public record. Maybe the records from these specific examples wouldn’t have changed the outcome of a particular election, but having these types of insights earlier can potentially make a big difference.

Alerts can be set to cover thousands of data sources available on illumis, and can be customized with user settings. You can learn more about illumis’ alerts here.

Please Note: This post was updated in June 2020 to reflect our company’s new name: illumis

Ensure employees aren’t putting your firm at risk of reputational damage or costly violations by integrating a political contribution compliance platform into your tech stack.

The news is out! illumis, inc. is now a COMPLY company! We’re incredibly excited about the new opportunities and benefits, this brings for you, our customers, and our organization.

Pay-to-play regulations (and associated risk) doesn’t simply turn off during the off-election years.